Usually I go to a handful of concerts during the summer but this summer included lots of work and other vacations. So here are the few concerts I did go to and why you should go see them too.

Everyone knows R5 is my favorite band but other than their music, they are amazing performers. They really interact with the crowd and really show you how appreciative they are for the fans. 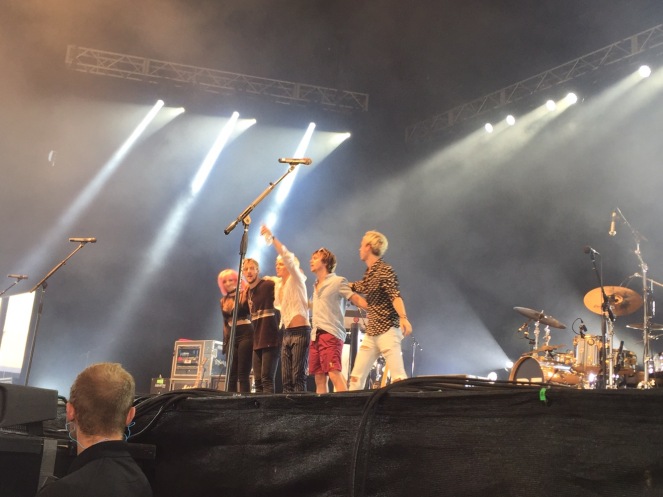 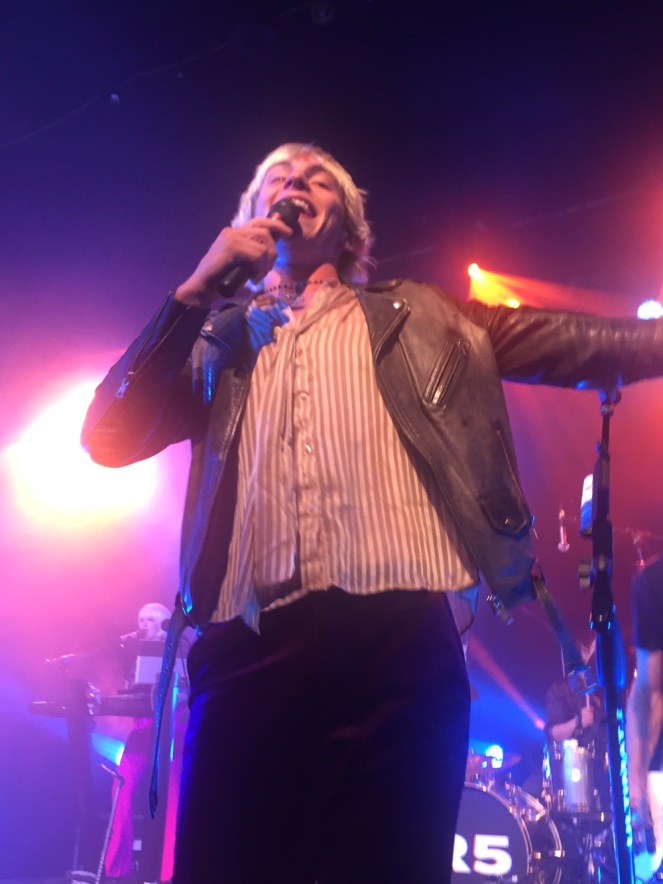 I lucked out and was able to score 3 front row tickets to the 15 in a 30 tour at PNC for $90. Let me tell you, this was one hell of a concert. Being front row at a small venue is nice and intimate but being front row at a huge pavilion was pretty awesome too. You felt the jealousy of everyone around you.

Ryan Follese came out and put on an awesome performance then wowed everyone but singing Tonight Tonight from when he was in Hot Chelle Rae.

Chris Janson was up next and he is the most energetic person I’ve ever seen. It was impossible to take a picture of him because he was moving and jumping around so much but his songs were so fun to sing a long to I didn’t even want to take pictures. 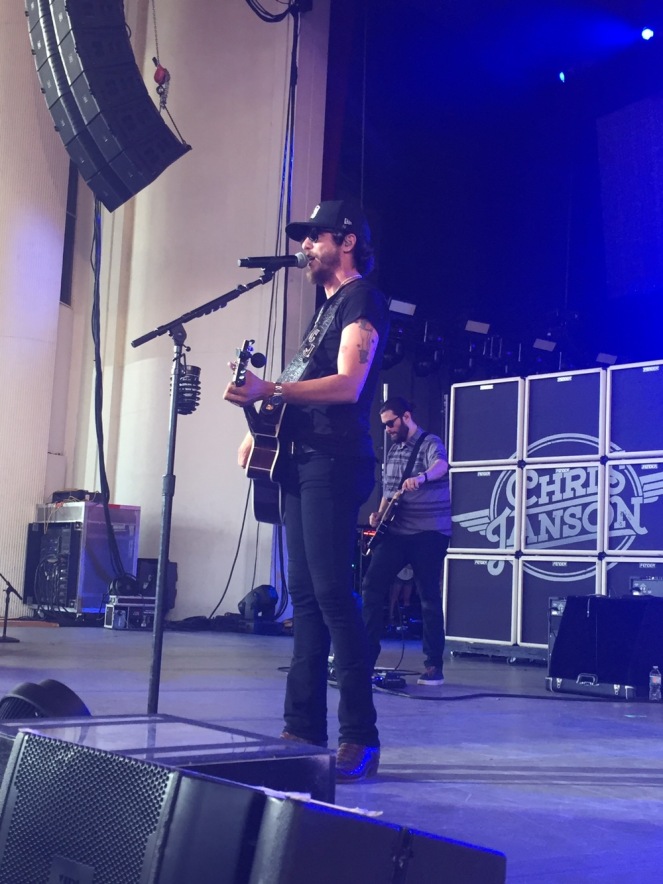 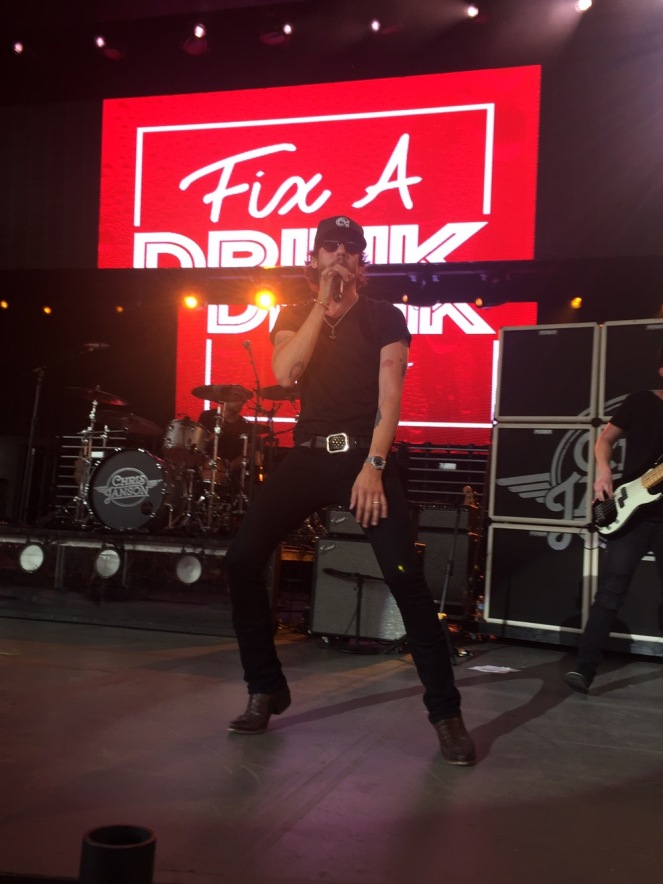 Maren Morris was the last opener and they really did save the best opener for last. She has such an amazing stage presence. She walked around the stage with confidence and she was knew she was hot. 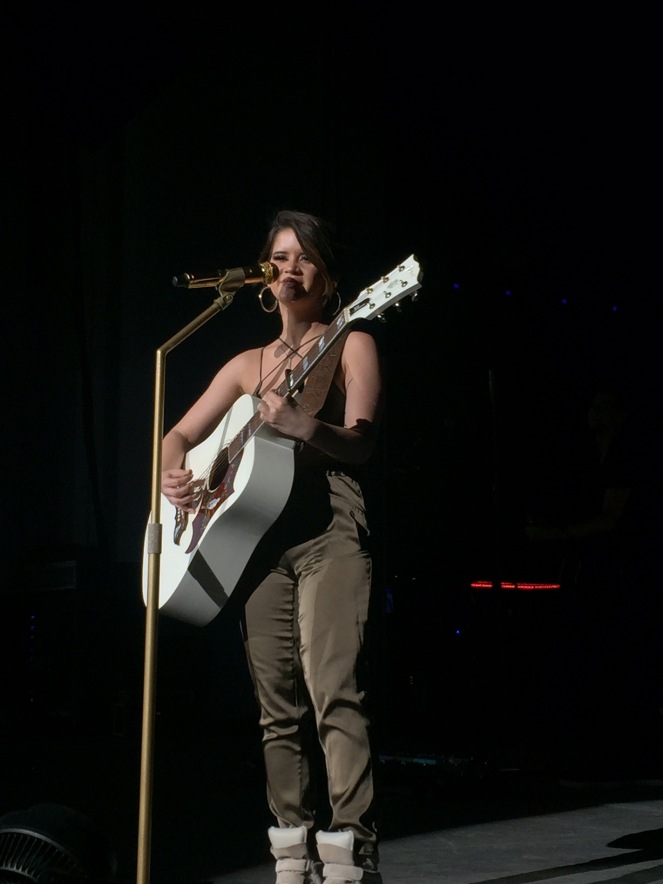 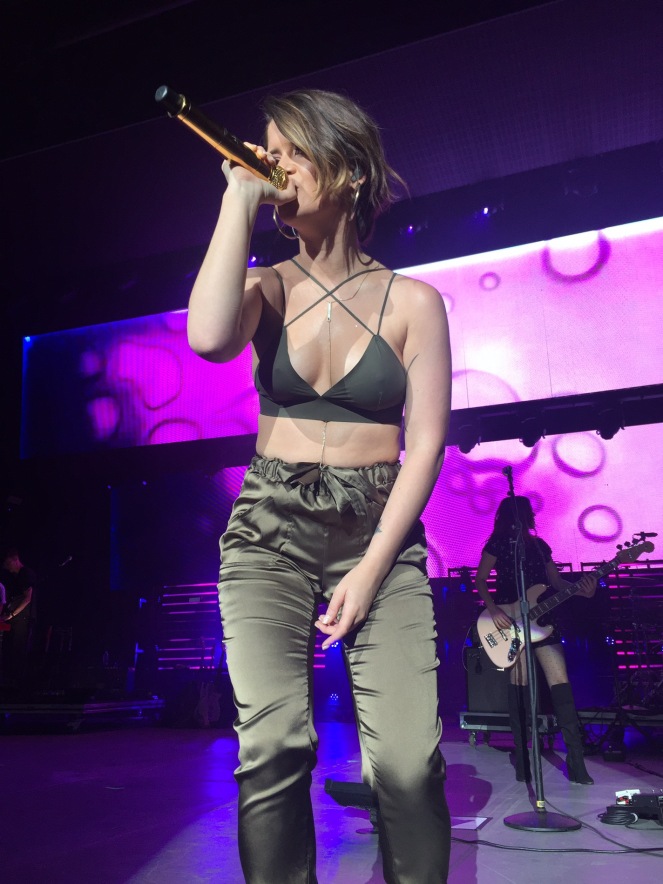 Sam Hunt came on around 9 and opened with Leave the Night On. I love how the stage was set up, he had the entire stage all to himself with his band towards the back. He included songs that he has written for other like Cop Car for Keith Urban and I  Met a Girl for William Michael Morgan. He kept smiling the whole time he was performing, you can tell how genuine he was. 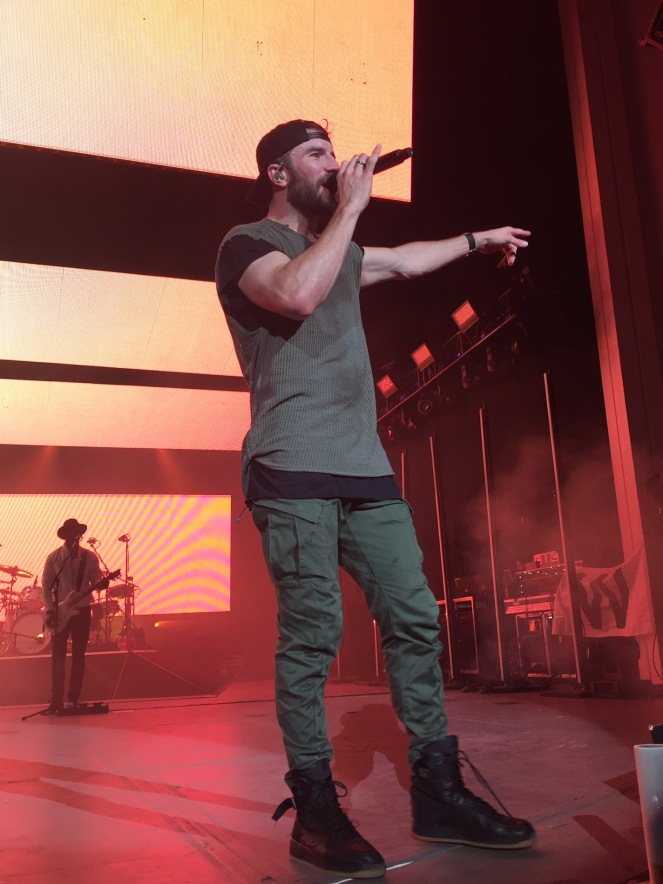 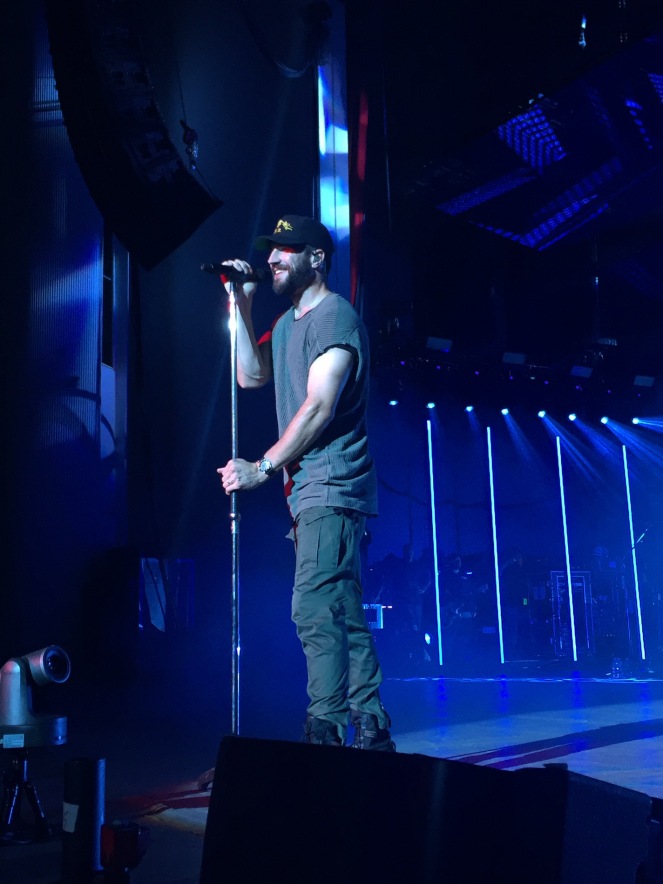 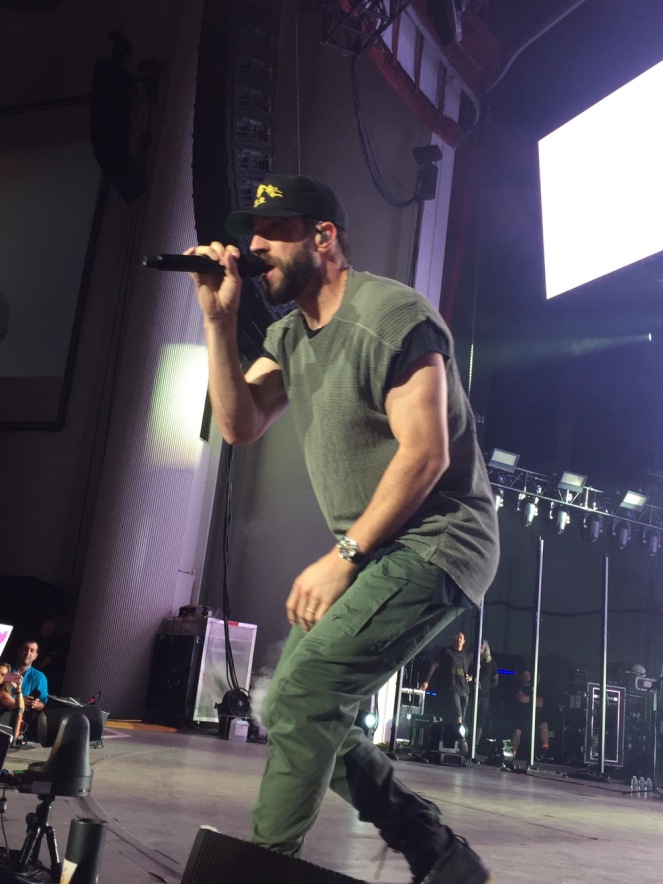 My sister, best friend and I bought lawn tickets off of Groupon for the concert. When we got there and went inside PNC has the option to upgrade your seat for $10. I know they do this for concerts that have a lot of unsold seats and you don’t get to pick what seats you upgrade to. We lucked out and got upgraded to section 104! Talk about luck.

Lindsey Ell came on first and I’ve never heard her before but she was pretty good. Next up was Chase Bryant. What a babe. He is such a good performer and I would absolutely go see him again ! On a side note, during his set my sister noticed Kevin Jonas standing off to the side watching the concert. Not many people noticed it was him right away so only a handful of people asked to take a pic with him. I was freaking out because of how big of a Jonas Brothers fan I am. I couldn’t pass up the opportunity and went over to ask him for a picture. He was really sweet and I made sure to thank him and told him to enjoy the concert.

Last up before Brad was Dustin Lynch, another hottie. His smile blinded me from my seat that’s how bright his teeth were ! I forgot how many songs of his I knew like Small Town Boy and Seein’ Red.

​
Brad Paisley started his set with First Time For Everything and a Purple Rain cover. During one of his songs he played clips of epic fails in the background and I couldn’t stop laughing. Then he gave this little girl one of his guitars ! What I loved most was his tribute to the troops. He brought out 4 service men and women on stage to thank them for their service.Chase Bryant came out and sang American Saturday Night then Dustin Lynch sang I’m Still A Guy with Brad Paisley.  He ended the night singing Water and had all the opening acts come out and sing with him including Kevin Jonas. Kevin even chugged a beer on stage and sang a little with Brad. Overall it was a really awesome concert experience. 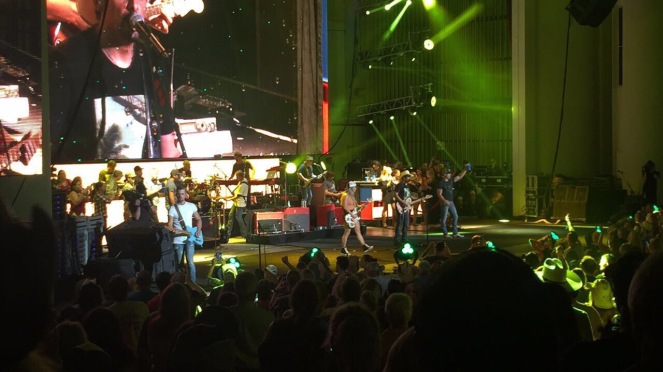 What was your first and favorite concert you’ve ever been to ? Drop it in the comments, I’d love to hear them 🙂

Hi, my name is Kimberly, everyone calls me Kim. I’m 24 years old living in New Jersey. I’m quite new to travel blogging but not to traveling itself. I’ve been traveling all over with my family since I was very young. We used to go camping up and down the east coast from Maine to Florida. Although my sister and I are older now and don’t go camping, we still do a lot of traveling with my parents as well as with friends. What I love about my family is that we try and go on a vacation, just us 4, every summer. We haven’t been out of the country all together so that is next on our list. A little more about me, I love going to concerts. I’ve been to over 100 of them in my short life and met some of my best friends through them. Out of all the music I listen to, country is my favorite. I feel like I can really relate to the lyrics more. I am currently taking online classes at Southern New Hampshire University in order to finish my degree in History. No, I don’t know what I want to do with it yet, except I know I want to use my knowledge of history and travel. I have a passion for travel which is why I wanted to start blogging about my adventures. I want to be able to share my experiences with others that way I can hopefully convince them to go visit the places I have. I believe traveling can make you a better person because it allows you to see the world as a bigger picture. I want to be able to meet knew people and understand that there is no person is like the other. On top of meeting new people, I also love learning about the places I visit and the culture as well which ties into my love for history. Now time to get a little more personal. Over the past couple years I’ve struggled with anxiety. It is common especially with people my age. Until recently, I didn’t know how to control my anxiety so I’ve missed out on many opportunities. Missing out on these things killed me inside, even if it was something tiny, it still affected me in a bigger way. Now I am able to control the way I feel when my anxiety starts to flare up by listening to music, blogging, etc (I was never into reading books or running like other people). I felt like this was something I should share with those who read my blogs in order for you to understand some things better. I am always open to suggestions so please comment and don’t be afraid to follow me on other forms of social media. I look forward to sharing my adventures with you. –Where should I go next?? View all posts by Kimberly Kruty

Hi, my name is Kimberly, but everyone calls me Kim. I started travel blogging because I wanted to document my travels as well as share them with others. I try to follow everyone back on all social platforms and I am always open to meeting new people so don't hesitate to strike up a convo ! I hope you enjoy my adventures as much as I have. xoxo